Trapped in Mariupol: What it’s like inside Ukraine’s besieged city

Mariupol in south-eastern Ukraine has been surrounded by Russian troops for more than a week. These are the voices of some of its residents

Ukraine’s port city of Mariupol is home to 500,000 people. It was captured briefly by Russia-backed separatists in 2014. The city was retaken by Ukrainian troops the same year, but has remained very close to the frontline between Ukrainian and separatist forces ever since.

Now Mariupol has come under attack again, following Russia’s invasion of Ukraine that began on 24 February 2022. Taking Mariupol would enable Russia to create a land corridor between areas controlled by pro-Russian separatists in eastern Ukraine and annexed Crimea, securing access to the sea of Azov. The city is currently under siege, its inhabitants trapped. More than 1,200 people are believed to have died.

“It’s still hellishly cold outside and in the house,” wrote psychologist Angela Timchenko from Mariupol on her Facebook page on Thursday. “We have a bit of food left. Adults are cutting down on food. Yesterday one of us queued for 6 hours at the last shop that is working to get some paste to spread on bread (which we don’t have) and candy.”

The following day, she added: “I have a question, and I’m not being sarcastic here. What [is the point of] protect[ing] Mariupol… if the city is strewn with corpses, if people die either in explosions, from hunger or buried in the rubble? A bit of ruined earth matters more than people’s lives, than the future of our children?”

Petro Andriushchenko, a member of the town council, wrote that citizens had endured “seven days of complete siege of the city and destruction of its infrastructure. This means that the city is without electricity, heat, drinking water and gas. For nine days, the city has been under constant shelling by artillery, under fire and air bombs.”

Academic Olha Yatchuk lives in the small village of Berdians’ke, on the Eastern outskirts of Mariupol. On 1 March, she and her family attempted to flee in a car, after their village was bombed, and managed to make it to Mariupol, which they left quickly, heading north.

“There were no people in the street,” she said. “We understood the city was surrounded from all sides and that it would come under fire. Ukrainian soldiers told us it could be dangerous to head out. We still did, but we might have been the last people to leave. There was shelling, explosions. As we headed out we saw troops with heavy weaponry gathered around the city.” How the Ukraine invasion ends may depend on China and Russian mothers
11 March 2022 | Paul Rogers
While everything suggests Russia may now be in serious trouble, there are still reasons for caution

Damage to infrastructure means that most residents have no phone or internet lines, and thus no way to tell their relatives outside the city that they are alive. Relatives outside the city monitor a Telegram channel sharing photos of buildings that have been hit, and names of people who are alive. The Azov regiment, a paramilitary group created by two neo-Nazi groups and now integrated into Ukraine’s national guard, also regularly posts updates about the situation in the city.

Filmmaker Sashko Protyah, originally from Mariupol but currently in Zaporizhzhia, managed to speak to a friend in the city on Thursday.

“There’s only one neighbourhood where there is signal,” he told openDemocracy. “You have to walk there, through the mud – there’s no transport, obviously – through a city that is being bombed constantly. It’s near Freedom Square. While we were talking, I could hear explosions. People in Mariupol are so exhausted. He said he knew of several residential buildings where people have had to bury victims in the yard.

“First the western part of the city was destroyed. Yesterday [Wednesday], a maternity hospital was bombed, as well as the central market. They’ve been shelling the city’s residential area indiscriminately. In the past several days I’ve seen several photos and I can’t recognise the city where I lived.” 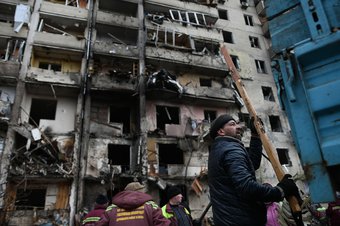 What do ordinary Russians think about the invasion of Ukraine?
7 March 2022 | Jeremy Morris
People don’t necessarily support Putin, but many I’ve spoken to are retreating into forms of denial

The lack of contact goes both ways. Relatives say people in the city don’t know anything about what is happening outside. Uliana Tokarieva, an NGO director whose relatives and colleagues are in the city, told me: “They don’t know anything – whether there will be an evacuation, how they will be notified, where to gather, if it’s safe, what is happening outside of the city, if it’s still Ukraine.”

For several successive days, it was announced that a humanitarian corridor would be set up into and out of the city so that aid could flow in and residents could leave.

But, as Ukraine’s president Volodymyr Zelensky told CNN on 10 March: “The invaders started a tank attack exactly in the area where this corridor was supposed to be. [...]

“Today they destroyed the building of the main department of the State Emergency Service in the Donetsk region. Right next to this building was the place where Mariupol residents were to gather for evacuation.”

During a face-to-face meeting with his Ukrainian counterpart on 10 March, Russian foreign minister Sergei Lavrov attempted to justify the attack on Mariupol’s maternity and children’s hospital. He said that Russia had warned at the UN days earlier that the hospital had “long been occupied by the Azov battalion and other radicals. They drove out the women in labour, nurses and general staff.” He added: “It’s not the first time that we see pathetic outcry concerning the so-called atrocities perpetrated by the Russian military.”

But Ukrainian journalist Ivan Syniepalov told me: “The Azov regiment serves as a scarecrow for Russian propaganda. Their targeted audience, in Russia, believes that Mariupol is occupied by Azov.”

He added: “Lavrov has said Russia would continue to bomb Mariupol unless Ukraine meets [Russia’s] demands. Basically they’re holding all the city hostage. In their mind, Mariupol is a pro-Russian city. Citizens should have greeted Russian troops with flowers. This is revenge.”

14 March: the spelling of Ivan Syniepalov was corrected.