Can the new coalition of US progressives defeat big money and Trumpism?

To stave off authoritarianism, Democrats need to deliver on their promises and directly confront the institutions that deny democracy. The party is failing on both fronts

This likely ruling – which would drastically restrict or ban abortion in nearly half of US states – is the culmination of decades of strategic coordination and funding of right-wing think tanks, legal societies and political representatives by Republicans and their billionaire backers.

Same-sex marriage, contraception, public education and environmental regulations might all be next on the chopping block of this ‘Christofascist’ agenda. Trump and the Republican Party – which has near universally adopted his authoritarian brand – do not control either the legislative or executive branches, but their power is alive and well.

The Democrats may well lose control of Congress in this year’s elections. Many progressives who voted for Joe Biden are disappointed in him. Can anything now stand in the way of the Trumpist juggernaut?

The authoritarian Right is taking full advantage of minoritarian levers of power, whereby a smaller segment of the population has a disproportionate influence. They have placed right-wing justices on federal courts, gerrymandered congressional districts – in other words, manipulated the boundaries of constituencies to favor one party – and used the Senate filibuster to block legislation, giving states with smaller populations disproportionate influence over the law.

Democrats also share some of the blame. Even though the party controls both electoral branches of government, they are failing to respond urgently to this right-wing threat. Many still defend some anti-democratic norms like the filibuster and cozy up to corporate interests, and this is blocking the passage of popular legislation and further enraging an already deeply cynical and angry population.

There is some hope for the Left, though. Over the past decade a growing progressive movement has emerged both within and outside the Democratic Party, in response to the 2008 financial crisis and a deep frustration with the Obama presidency. 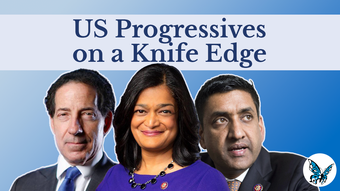 The big names are familiar, headlined by Senators Bernie Sanders and Elizabeth Warren and Representative Alexandria Ocasio-Cortez. But there is also a large contingent of lawmakers (even beyond the so-called ‘Squad’) pushing bold policies such as a Green New Deal, Medicare for All, free college, a wealth tax and even a Third Reconstruction (following attempts after the US Civil War and the civil rights movement).

In Congress they are part of a nearly 100-member block called the Congressional Progressive Caucus – chaired by Pramila Jayapal, a representative from Washington state.

Some are democratic socialists, others call themselves 'progressive capitalists'. What unites them is the need to pass popular public investments, implement systemic democratic reforms – and crucially, defeat Trumpism.

They are the subject of a new openDemocracy documentary, ‘US progressives on a Knife Edge’, narrated by Anthony Barnett. It features leaders of this incipient progressive movement both inside and outside Congress, and examines a critical question: can US progressives defeat authoritarianism?

The 2020 election revealed the movement’s potential. Biden was elected with nearly 7m more votes than Donald Trump, on a platform that adopted some left-wing policies: a $15 minimum wage, decarbonizing the economy by 2050, lowering prescription drug prices, canceling student debt, passing voting rights and more. It was a departure – at least rhetorically – from the traditional center.

But Biden hasn’t made good on those promises. Last March Democrats did pass the popular $1.9tn American Rescue Plan. Since then, however, Biden has failed to deliver on crucial promises such as climate action and voting rights legislation. This, coupled with inflation, is driving the incredibly low polling numbers ahead of the midterm elections.

“I speak with a number of people every day who are quite upset with the current administration,” Tope Folarin, the executive director of the progressive Institute for Policy Studies think tank told openDemocracy.

“There’s a sense that the current administration is in office because of the mobilization of Black and brown people across this country, people who sat in line for hours and hours on end.”

Many activists viewed Biden’s last-minute push to pass the Freedom to Vote Act – which would expand access to the ballot, end partisan gerrymandering and curb the influence of ‘dark money’ – after the Build Back Better package of spending on environment, health, housing and education failed in the senate as a cynical move. “They wondered why that wasn’t the first thing he focused on”, Folarin added.

Other progressives emphasize the poor legislative design and expiration of programs in the American Rescue Plan, which provided economic support for the destabilizing impact of the COVID-19 pandemic.

“The Democrats could be facing an electoral massacre and they're asking, ‘Well, what did we do wrong?’” David Sirota, editor-in-chief of investigative news outlet The Lever and former Bernie Sanders speechwriter, told openDemocracy.

“Well, it's obvious what you did wrong. You passed the popular American Rescue Plan [and] let it run out. You let the child tax credit run out… and people are still hurting and they're pissed off.”

For many on the Left, these defeats are indicative of the control that the ultra-rich still retains within the Democratic Party. According to The New York Times, 15 of the biggest politically active nonprofit organisations – funded by wealthy donors – aligned with the Democratic Party spent more than $1.5bn in 2020. By contrast, similar groups aligned with the Republicans gave only $900m.

Now, some of the Democrat lawmakers most wedded to the filibuster and opposed to significant climate investment and prescription drug pricing reforms (to name just a few issues) are some of the leading beneficiaries of corporate donations. Heads of the party, such as Nancy Pelosi, speaker of the House of Representatives, have also been opposed to anti-corporate measures such as banning stock trading for members of Congress (although she has since reversed this decision).

“We have to understand how much power [the corporate status quo] still have and how they will wield that power… to prevent systemic change from happening,” Sirota said.

However this tide is beginning to shift with a younger and more progressive generation of lawmakers – some of whom mounted primary challenges against entrenched incumbents.

Many members of the Congressional Progressive Caucus now explicitly refuse corporate PAC funding – whereby corporations and wealthy donors can donate unlimited sums of money to indirectly support political campaigns – and the big-money interests within the US political system.

“The last 40 years have been too much of letting corporations define the rules, without smart, well-crafted state intervention,” Ro Khanna, representative for Silicon Valley and a co-chair of Bernie Sanders’ 2020 presidential campaign, told openDemocracy.

Khanna, a self-identifying ‘progressive capitalist’, supports a wealth tax, wants to distribute the gains of Silicon Valley to rural communities across the US and believes in the power of markets to “allow the private sector to flourish and have innovation”.

After the legislative failures many of these lawmakers are pressuring Biden to use more executive authority to deliver on promises such as canceling some student debt, and to end – not expand – oil and gas drilling on federal lands.

With the likely Supreme Court abortion decision, progressives are again urging the party leadership to finally break from institutional norms and abolish the filibuster to codify federal abortion protections and expand the Supreme Court, which would limit the power of the Republican-nominated right-wing justices.

“My theory of change is that you can use elected office for organizing,” Representative Jayapal told openDemocracy. “If politics is the art of the possible, then it’s up to us as organizers – wherever we sit – to move the boundaries of what is seen as possible.”

“We are the vast majority in the country,” Maryland representative and manager of the Donald Trump impeachment trial Jamie Raskin told openDemocracy. “But what they’ve got is a bag of tricks. And those tricks are all the anti-democratic levers of power.”

But what if the US had a vibrant democracy? Well, the progressive agenda is broadly popular. After Amazon and Starbucks, what’s next for revamped US labor movement?
29 April 2022 | Aaron White
Workers across the country are beginning to reverse a 40-year decline of labor organising. But deeper problems remain

“Democracy itself is actually the leading issue when we do surveys,” Larry Cohen, the former president of the Communication Workers of America and chair of the grassroots organization Our Revolution told openDemocracy. “Without a better democracy, we won't have healthcare. We won't solve the climate crisis. We won't deal with racial justice. We won't deal with the inequality of wealth.”

“We didn't start off as a democracy”, said Raskin. “We started off as a slave republic of white male property owners. But it’s been through successive waves of social and political struggle that we’ve opened America up.”

Over the past several years there has been immense grassroots energy, marked by 2020’s historic Black Lives Matter protests, a resurgent climate movement, an energized feminist and LGBTIQ movement, and a revamped US labor movement.

And now these movements are unifying – as many did to oust Trump – in defense of abortion and civil rights. With congressional allies, a growing progressive independent media and intellectual ecosystem, alongside the political openings exposed by COVID, the most cynical legacy of neoliberalism – that there is no alternative – is dying.

But confronting the new coalition are the momentum and institutional foundations of authoritarianism. Popular policies alone will not be enough.

“If there’s one thing that religion and faith do really well, it’s the grand story about human history – about who we are, where we’ve come from and where we’ll go,” said Tope Folarin, the executive director of the Institute for Policy Studies.

“A lot of people on the Left are allergic to that or dismissive out of hand. But there are a number of people who are waiting for an invocation of faith as we talk about some of the grand challenges we face.”

For Folarin, this narrative should center on building an inclusive democracy, and follow the vein of Martin Luther King Jr’s “beloved community”, rooted in economic and social justice.

“We have a really powerful argument if we mix the facts that we have at our disposal with a really strong narrative about a future of America that includes everyone.”

Watch the openDemocracy documentary ‘US Progressives on a Knife-Edge’ and extended interviews with progressive members of Congress and activists here.